The Ancient Rite of Passage is an epic quest for Dragons to ascend from an Adult Dragon to an Ancient Dragon. Much like the RoP, no one would be able to complete these quests completely alone and must require help from their friends to possibly think of finishing them. The first part of the epic quest is ARoP01 - Council of Ancients - Seek the Elders.

Knowledge Base: The Ancient Rite of Passage[edit]

How do I start my Ancient Rite of Passage?[edit]

These are the only constraints (or limitations) on the quest. But they are also considered a minimum requirement. It is suggested that you have completed your Dragon Ability Quests and have obtained a higher level of Dragon Crafter school as well so that you may craft your own items.

I am stuck on the quest. What do I do?[edit] 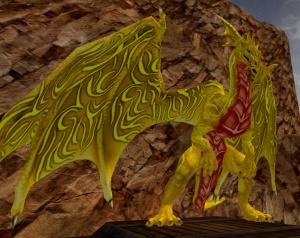 I deleted an item which an NPC now is asking for. What do I do?[edit]

This quest has many parts to it and has undergone numerous changes over the years so that it is more forgiving than it was before. It is designed so that most every quest in the series is self-contained so long as you don't delete any of the items.

Origin [1] by Velea of Virtrium.

The Ancient Rite of Passage was intended to test the strength and courage, wisdom and insight of Drulkar's followers, allowing them to achieve the status of ancient dragon. From each of the four corners of Istaria, atop the highest mountain ranges, Drulkar communed with the great winds and beheld the peace that once was. He knew Istaria better, perhaps, than the goddess who gave her name to it. He knew its darkest dangers, and most peaceful meadows, its deepest depths, and most soaring heights. Through the Rite of Passage, those who wished to gain his favor would follow in his footsteps, discovering these things both in the world around them, and deep within themselves. As the years passed, however, fewer and fewer dragons choose to brave the trials of this Rite.

The lesser races began to appear, and Drulkar became annoyed at the declining power of his children. Wrapped up in their own petty squabbles, his children came to him less and less for guidance. At last, he left the realm of the Prime, unwilling to watch his people lose their rulership over Istaria. At the occurrence of the Great Schism, Drulkar ended the rite in disgust, sealing himself away in isolation for many long years. Though Drulkar has not returned to the prime, the seal which separated him from his people has broken at his command.

Drulkar has charged the Council to recreate the ancient ritual and commission a new breed of champions to stand at Istaria's hour of need. The face of Istaria had changed, and with it, so must the Rite. Yet in many ways a dragon attempting the Rite in the present age, will find it far more challenging, a grueling test indeed.The Council is very specific about who may attempt the Ancient Rite of Passage, and will allow only those who have a legitimate chance at success. A dragon's age, maturity, and knowledge are all measured and evaluated before the Council will permit the Rite to begin.