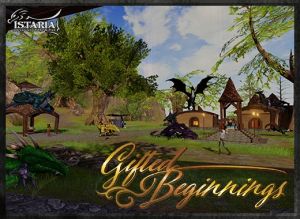 Many adventure abilities are now mastered to encourage picking up side classes and give more variety to multiclassed bipeds. In addition, a few abilities have been given some polishing to make them more attractive or balanced.

Small adjustments have been made to the skill gain of various classes to solidify their roles. Additionally, jewelcraft has been added to Outfitter and Jeweler has been upgraded to a prestige school. This change is to better allow access to crafting jewelry for new players.

New Trismus has received an overhaul to reflect our new form of storytelling and better introduce new players into the game.

The Lesser Aradoth has received wide-reaching quest changes to better balance and scale with players moving through the region for the first time, while also offering interesting new storylines, rewards, and points of interest.

The Tazoon Region, focus of our prior updates, has been given some fixes and corrections to outstanding issues. General

Genevia has undergone a special change that includes plots, communities, and resources. Each community on the island has been given the capacity to be more akin to a real town with structures, NPCs that offer services, plots have been merged or resized, and a central themed purpose.

Furthermore, each has buildable structures, some of which can be activated to provide services to the town, and each is more specific to the resources that are nearby. Some Tier 2 resources are now also available on the island. Dragons

Dragon quests in tier two have been updated to reflect a gradual change to make ability quests more spaced out and interesting within the tier. Additionally, Khemerius’ Drain Bolt quests have received a total revamp and the dragon himself now travels the world before settling in Kirasanct to offer better access to his questline.

Militia Surplus vendors have been added or updated to sell Tier specific un-techniqued equipment including weapons, armor, and dragon scales. This is to address the drought of equipment availability to low-tier characters, without uprooting high-tier crafters’ place in the later game.