Not to be confused with Nyestra Helian, the founder of the Helian Faction. 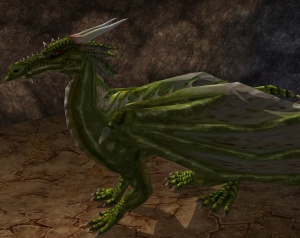 "Helian believed that the rise of the other races represented a challenge by which Dragonkind should rise to. If we were truly the most enlightened race in Istaria, then we should seize the reins of leadership and lead all races into the future." -Avariatus

Ever since the Great Schism, when a hatchling dragon chooses to become an adult, it is faced with a choice to follow the Helian Faction or Lunus Faction.

The Helian Faction contains the followers of the Nyestra Helian for her views of how the biped races should be treated and ruled. They see the rise of bipeds as an opportunity to guide them into a better future under the unquestioned leadership of dragons. They did not believe that force and fear should be their tools of leadership. Their views directly contrast with those of the Lunus Faction.

The homeland of the Helian Faction is the splinter-faction southern area of Chiconis, in the Granitefall Mountains. This is where the current ancient 'leader' of the faction - namely Semeneth the Ancient resides. All those whom wish to continue the line of Helian followers report to her for their Rite of Passage.