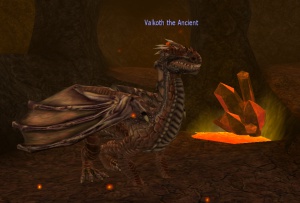 "Lunus believed that Dragonkind should lead by force as they had in centuries past. That Dragons were predatory and should lead through strength and terror. Lunus and other Dragons believed that the ascension of Lesser Races was a threat to dragon civilization itself and could not be tolerated." - Avariatus

Ever since the Great Schism, when a hatchling dragon chooses to become an adult, it is faced with a choice to follow the Helian Faction or Lunus Faction.

The Lunus Faction contains the followers of Malganival Lunus for his views of a society in which Dragons should be the unchallenged and undeniable rulers over bipeds like the pests they believe they are. They see bipeds raising in power and intelligence in the world a threat to dragons, and that they should be put in their place by terror and violence. Their views directly contrast with those of the Helian Faction.

The homeland of the Lunus Faction is the ancestral home of the dragon; Dralk. This is where the current ancient 'leader' of the faction - namely Valkoth the Ancient resides. All those whom wish to continue the line of Lunus followers report to them for their Rite of Passage.