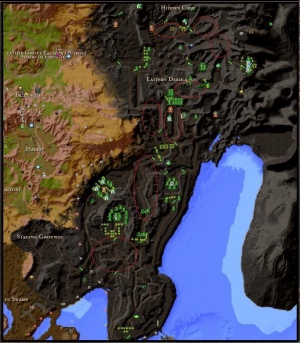 Gigaroth was the mightiest Kwellen that Istaria had ever seen, but the Gifted slew him in a mighty battle and now his son has sworn revenge upon all Gifted.

The Son Of Gigaroth is an epic monster that spawns at random spots within the Eastern Deadlands. His own followers known as Son's Shield will follow him as he moves. The Empyrean Essence is gathered by using an Essence Siphon or Essence Harvesting (ability).

Pull him to a quiet spot where no mob can add. Try to weaken him with Primal Vengeance (or if that is not available, a more easily found good debuff is Bane, techable to blighted spells). Usually a group of 3-5 experienced Adventurers can take him down. He can be stunned, so using nature spells such as Thunder Cloud and Shocking Blast keep him under control. While Fearlessness is active, he will be immune to stuns (please note Fearlessness is bugged and causes the to-hit chance to drop to near zero), so make sure to keep up with lots of healing.

Note that Healing-over-time effects are not diminished by Void Life (Ex: Dragon breezes, Aura of Health, Growth), so make sure to always have one of these up when Void Life hits, as direct healing abilities will not be as effective. The strongest HoT effect is Aura of Health.