Difference between revisions of "The Guardian and the Crystalshaper"

You have entered the Fiery Rift and located Aratanosh, the Master Crystalshaper. She has warned you of a beast called the Guardian of Rage that cannot be allowed back into the Prime.

Aratanosh tells you, '<player>, my memories begin to return. I told them to leave me, that I alone would keep the Guardian at bay, to prevent it from crossing into the Prime. My friends, Balennos and Relstaroth, they obeyed though I know they did not wish to. And now you also must leave, else the Guardian destroy you where you stand.'

Aratanosh tells you, 'You will not go? *she grimaces* Stubborn younglings. Very well, you have Ascended and earned a right to your opinion and I will not overrule you. Perhaps... No, it is too dangerous.'

Aratanosh tells you, 'What is it? A creature of the Realms, <player>. The Guardian of Rage feeds on the life-energy of others within the Rift. We, as beings born of the Prime, are especially rich in this life-energy and it is drawn to us.'

Aratanosh tells you, 'You see, <player>, alone I stood no chance of defeating the Guardian. I could only lead it on a grand chase, eluding it for eternity. Together, however, perhaps we are strong enough.'

Aratanosh tells you, 'Simply being in my presence should empower you to fight the creature. Gather your power, companions, and seek out this enemy. Defeat it if you can and return here to me.'

You have defeated the Guardian. Now collect the Fiery Shard of Rage from the corpse.

Aratanosh tells you, 'You defeated the Guardian of Rage, I felt the wash of energies dissipate even from here. It will return, you cannot truly destroy a creature of the Rift, <player>, but it will take time.'

Aratanosh tells you, 'What is this? You recovered a Shard of Rage from the Guardian? Excellent. Oh, the memories return... This shard, <player>, can be used to create something wondrous and amazing. Knowledge I am sure you do not possess outside in the Prime. The knowledge of Shaping.'

Aratanosh tells you, 'Would you learn more of this knowledge?'

Aratanosh tells you, 'Welcome, my friend. Crystalshaping is a powerful skillset to possess. You can create the most wondrous and useful objects, but it is not for the faint of heart. It requires the use of emotions from your foes. You already acquired a Shard of Rage, now I will teach you to inspire Rage in your enemies.'

You have received 1 Inspire Rage I.

Aratanosh tells you, 'Now, my friend. This is how it works. First, you must inspire rage in your foes. (Use the ability, Inspire Rage, on yourself) Then, attack and defeat an enemy that can feel emotion. Each emotion you attempt to inspire in your foes may have Aratanosh tells you, 'In our case you will be attempting to inspire rage in your foe and this most likely will cause your enemy to become enraged. Be wary, but don't give up! Should you defeat your enemy, you will find that you may recover a Sliver of Rage from your foe. Now, go, recover ten slivers of Rage and return here to me.'

You have looted sufficient slivers. Return to Aratanosh.

Aratanosh tells you, 'Well done, <player>. Now, take this and turn them into Minor Shards of Rage.'

Return to Aratanosh with the Minor Shards.

Aratanosh tells you, 'Yes, good job <player>, these will work nicely. You see how they pulse and the energy within swirls constantly, almost as if they contain rage itself? Now, take this and create a Viridian Resistance Crystal of Flame.'

Return to Aratanosh with the Resistance Crystal.

Aratanosh tells you, 'Well done, Crystalshaper. Consuming a Resistance Crystal will grant you a significant boost to your flame resistance for a time. Be careful, however, as it will also lower your ice resistance by a significant amount. All resistance crystals work in this manner, raising one element and lowering another. It is all about balance, <player>. So be careful when using crystals and when jumping into situations as they can lead to disaster if you aren't careful.'

Aratanosh tells you, 'Should you wish to learn more, return here to me and I will sell additional knowledge to you. There are six emotions in addition to Rage that you can inspire as well as four types of Crystals. You should know, however, that in addition to the seven inspired emotions there are also five emotions that cannot be directly inspired and that you can get under special circumstances.'

You have received 1 Stone of the Crystalshaper 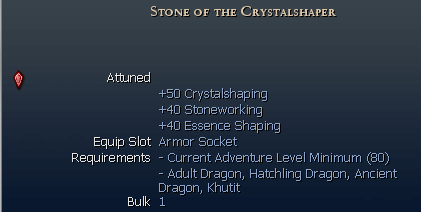 Aratanosh tells you, 'Good luck, <player>, and safe journeys. I will remain here to guard the passage into the Prime and prevent the Guardian from crossing over. Please accept this as a token of my gratitude.'

(Note, you should not have a Fiery Shard of Rage in inventory for another to drop.)

Retrieved from "http://www.istaria-lexica.de/index.php?title=The_Guardian_and_the_Crystalshaper&oldid=105731"
Categories:
Facts about "The Guardian and the Crystalshaper"
RDF feed