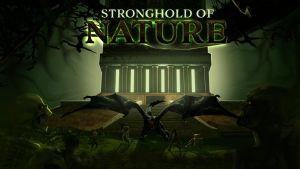 As we move up the tiers in our content expansion, it is now time for the first update in the Tier 4 region, starting with the Aubador, the Western Deadlands, and the Tower of Nature.

Silvane is a ruined elven village which has been recently discovered near the Tower of Nature. After staying years in the corrupted ground of the Western Deadlands, it has been infected with Blight. The Withered Aegis have found and excavated the area, trying to ward off the Gifted and protect their prize.

As part of a continued effort of beautifying Scorpion Island and its communities, a number of settlements have received overhauls across the island.

Slate Hills & Mastodon Port have also both been transformed to more lively communities.

Istaria features two forms of non-dedicated crafting/resource gathering methods in quests: Ingenuity and Intuition. Up until recently, both of these used the Istarian Army Knife tool to function. This, however, caused a number of issues both from a player perspective as well for us in terms of development. The choice has been made to give each of the two skills their own respective tool.

Now that the excitement has died down around the Gifted Beginnings update we’ve had the chance to evaluate the values of the New Trismus Square buildable structures, as well as make changes based on player feedback. With this update we’ll be fine-tuning the degradation rate as well as the xp and skill values, but also introducing a secondary award and an NPC that will explain the mechanics of community projects to new players.

Dragon Ability Quests have continued to receive a facelift to streamline them as well as the targets they require players to go after. The current changes go all the way up to the end of tier 4.

Prestige Adventure Schools will no longer start at level 20, as this was causing a lot of confusion related to their skill gain, and will now begin at level 1 just like the base schools. Skill gains per level have been shifted around so they will still have the same maximum skill at level 100.

Retrieved from "https://www.istaria-lexica.de/index.php?title=Stronghold_of_Nature&oldid=135911"
Category:
... more about "Stronghold of Nature"
RDF feed
Releasedate
May 31, 2022 +