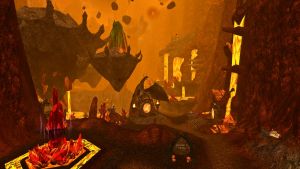 The ascestrial home of all Dragons, now the city of the Lunus followers.

Chiconis, the home of the Helian located in the Granitefall Mountains.

The Great Schism was the split of Dragon society into two main factions - the Lunus and the Helian. It happened many hundreds of Istarian years ago in 471 B.R. The ripples of its impact are still felt within Draconic society, as the factions still live separated with most of a continent between them. To this day, the debate which sparked the Great Schism still rages among the scholars and warriors of the dragon race.

600 B.R. Vandus Declares Humans Free of Dragons – With Vandus as their undisputed leader, Humans declared themselves free from their servitude to Dragons. The announcement was met with little resistance by Dragons, who themselves were occupied with the larger questions about how to deal with a growing and belligerent population.

575 B.R. Closing of The Gate of Embers (Dragon) – With a growing rift between Dragons and the growing influence of the “lesser” races, the majority of the ancients, including the Council of Elders, chooses exile through the Gate of Embers into unknown realms. They close and bury the Gate of Embers behind them. A massive earthquake shakes the lands near Aughundell and is felt as far away as Dalimond. The city of the Dwarves suffers great damage and many of its oldest mines and tunnels collapse.

451 B.R. Founding of Chiconis (Helian Dragon) – Led by the great leader, Helian, a large part of Dragon society chooses self-imposed exile from their homeland of Dralk in order to found a new city in the south, Chiconis.

344 B.R. The founder of Chiconis and one of the greatest scholars of Dragonkind, Helian, dies. Her burial location is kept a secret, but is rumored to be somewhere on the Dalimond Peninsula. Many claim that her greatest opponent, Malganival Lunus, personally traveled to the tomb to pay his final respects. <ref>http://community.istaria.com/forum/showthread.php?13550-Istarian-Timeline</ref>

"The Great Schism is a pivotal time in Dragon society. For centuries Dragon culture has been divided into two camps, the Lunus and the Helian. The more territorial, warlike Lunus faction believes that the other races should either serve to edify Dragon civilization or move out of the way. This heavyhanded approach was theorized by the military leader of the Dragons Malganival Lunus. Typically members of the Lunus faction are Warriors in dragon society, and more territorial in nature. This can be seen in the fact that the home seat of the Lunus faction is actually the ancestral home of the Dragons, Dralk.

In the second camp we have the Helian, named after their leader the Dragon scholar Helian. Their views on how to handle the rise of the other races of Istaria are quite different from the Lunus, but Dragon arrogance can still be seen in their view as well. Their ideals stem from the belief that if Dragons are the most enlightened and advanced race in Istaria, they should seize the reigns of power and lead all others into the future. In doing so, they will return the reverence the other Living Races once had for them and do so in a civilized manner, through example.

Although these two factions were never violent towards one another, the years of debate slowly took their toll. What was once a simple debate became a twisted power struggle in which greed and possessiveness were the only winners. A war was brewing in Dragon society, something had to be done, and it was the Helian who acted first. Their approach to the matter was a civil one however. They chose to relocate and form a new city, Chiconis, where they could pursue their agenda in peace. The Lunus felt as if their society was being torn apart, yet they did nothing to stop the move by the Helian. The Lunus had enough foresight to know better than to stop the move, knowing it could throw Dragon society into a civil war.

The Helian camp moved deep within the Black Mountains where they founded the city of Chiconis. The city is located between the Humans and the Dwarves with which the Helian faction share a common understanding and peace. The close proximity to other living races does not mean that the Helian do not value their solitude however; in fact travel by foot to the city is a diffucult journey. Upon reaching Chicinos invited visitors of any race are still looked upon apprehensively by the Helian who wish to persue their agenda alone and in peace." <ref>http://community.istaria.com/forum/showthread.php?t=4441</ref>