Kion, the home of the Saris of Istaria, is an open and sprawling collection of structures along the sandy northern shores of Lesser Aradoth. The Saris have adopted a distinct style of architecture, based on cultural events and history. Color and design serve as a significant indicator of function and purpose within Saris society, and their architecture reflects this. Kion has existed as the main outpost of the Saris for many years, and it has done so in relative tranquility. There are no walls around the City itself, though the central structures of Kion are reinforced against raid and siege. The city has remained relatively unchanged over the years, though the recent re-opening of the teleport gates has brought an influx of other Living Races to Kion. A significant number of these visitors come seeking one of the few Monk trainers to be found in Istaria. Kion also supports a brisk trade economy, being strategically located near several basic resource deposits. The cancerous touch of the Withered Aegis, however, has not spared even Kion in its relative safety; malign denizens still roam Lesser Aradoth near the city, and an unwary traveler might find themselves beset by adversity.

The center heart of Kion's Market. 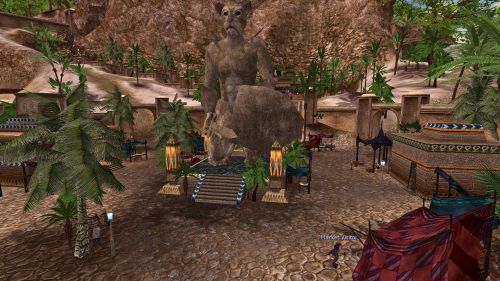